Take a trip around the world discovering what occurred during the life of George Washington. This volume draws from far-reaching cultures and continents to create a picture of the world in which Washington lived and weaves the major events of his life into a fascinating story.

Voyages and Expeditions by Cook to Australia, Anson to the Pacific, Portola and Junipero Serra to California.

Discoveries such as Pompeii and the Rosetta stone.

Important Events such as the writing of the Declaration of Independence, the American Revolution, the creation of the Constitution, the French Revolution and many, many more.

Kings, Queens and Leaders such as Empress Catherine the Great of Russia, George III of England, Emperor Qianlong of China, Frederick the Great of Prussia, Louis XVI and Marie Antoinette of France, Sultan Mustafa III of the Ottoman Empire, Toussaint l'.Ouverrure of Haiti and the young Napoleon to name just a few. 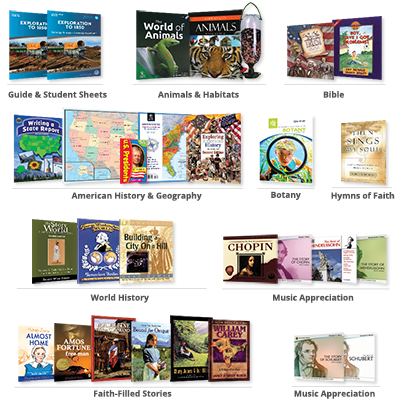 Explore the New World with Leif Ericsson, Christopher Columbus, and others. Discover the amazing story of the U.S. from colonial times to the California gold rush in this year-long curriculum for 4th-8th grade.

Learn about the courage and faith of many who came to America. Help children understand man's struggles in world exploration as your family memorizes the book of James.